WAN Synchronization is an enhancement of an AOS feature that allows EMA® to synchronize data even when appliances are placed in data centers that are located separate geographical areas.

If data is has to be synchronized between two geographically separated sites over a certain distance, the use of conventional protocols often results in substantial latency problems. Transferring large amounts of data consisting of small files and documents introduces transmission latencies in the millisecond range that accumulate to delays of hours or even days. This is caused by the necessary processing overhead and "acknowledgments" that have to be sent back for each individual file once it has been transferred. This effect prevents efficient, near real-time synchronization. Facing the requirements of compliance-oriented storage and the need of keeping locations in the same state, this is often an unacceptable state.

WAN Synchronization solves the issue with a custom network synchronization protocol developed by ARTEC. The main appliance connects directly to the second appliance to be synchronized. AOS will transmit any data directly to the second appliance. If there are lage amounts of small files, they are organized into batches and then transmitted over the network batch by batch. This approach greatly reduces and can even eliminate a loss of efficiency. 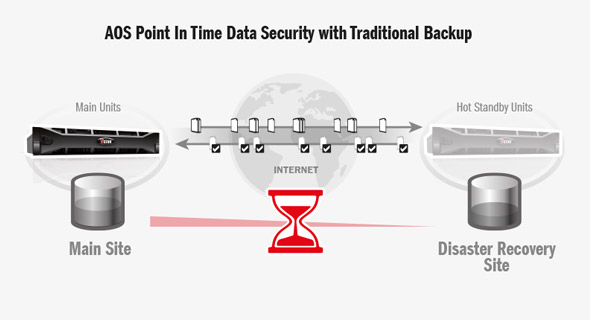 AOS can not only write a copy of all data to an on premise archive storage location, but also to a storage location located in a different geographical area. In both cases, AOS writes new documents as quickly as possible, even in synchronous mode if desired, whereas conventional systems often only perform a daily backup.

This approach offers a considerable security advantage. If a fire or another kind of disaster causes the appliance located at the primary data center to fail, a standby appliance located in a geographically separate data center can take over immediately with a complete copy of the full-text search index, a fully functional internal database, and a completely independent storage location. Downtime and data loss are virtually eliminated. Because WAN Synchronization does not work like a conventional backup system, there will be no loss of data at all when synchronous mode is also enabled.

Conventional approaches for WAN optimization often come with a number of critical disadvantages. When protocols such as CIFS, NFS, and especially iSCSI, are used, the latency problems mentioned before quickly return. This is especially the case when data centers are geographically far apart.

Secure data encryption is a prerequisite for most enterprises and organizations for understandable reasons. When handling encrypted data, such as the data created by AOS, which is by definition uncompressible (encrypted data is essentially random-looking and has no patterns to compress), traditional WAN optimization solutions will often still make an attempt to compress the data. In practice, this often causes the encrypted data to become even larger, which leads to an additional performance penalty. 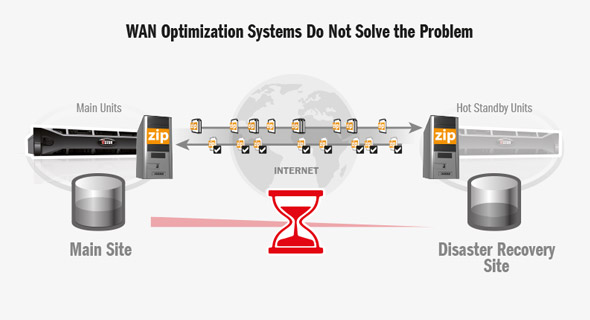 Protocols like CIFS, NFS, and iSCSI are not a viable solution for geographically separated data centers. They are also not optimized for transmitting many small files, such as e-mails, documents from file servers, printouts, scanned documents, or voice communication. This is true all the more if data also needs to be protected to remain secure and compliant.

Our newly developed AOS WAN Synchronization Protocol provides a reliable solution, because it can combine up to 20,000 documents into one large transport, which is then transmitted as one efficient chunk of data. This approach allows AOS to transfer data reliably and quickly even when used over high-latency links, thus achieving the highest speeds that are physically possible in any given environment.

Stay in Sync with WAN Synchronization

Just like our patented Federated Search feature, WAN Synchronization easily works with public Internet connections and does not require the use of a VPN tunnel to provide security. The protocol used already incorporates tough encryption technologies that are equivalent to those used by enterprise-grade VPN solutions. When we build standby appliances, we also install custom security certificate based on the unique serial number of the appliance. This certificate matches that of an existing primary appliance. The security keys are located inside the system and are protected by the same Trusted Computing technologies that are also used to protect AOS. This setup makes your life easy. There are no keys, certificates, passwords, or access rules that need to be assigned when setting up WAN Synchronization. Subscribing to a cloud service is also not required. Only authorized appliances that fit together will communicate with each other, and will always do so securely.

Reach maximum speeds without latency slowdowns when synchronizing large amounts of data, even when source and target are geographically far apart

Direct connection and data transfer from primary to standby appliance

Independent of conventional protocols like CIFS/SMB, NFS, and iSCSI